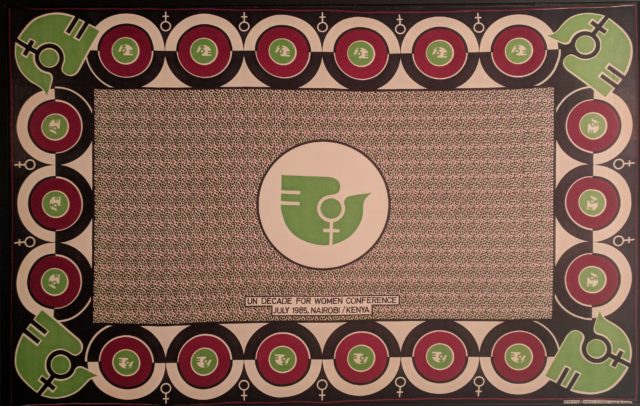 World Conference to Review and Appraise the Achievements of the UN Decade for Women was held in Nairobi on July 15-26, 1985. It was the third UN world conference on women and one of its most lively. Around 1,900 delegates from 157 Member States participated, with an additional 12,000 people at the parallel NGO Forum. The inter-governmental conference examined obstacles to achieving the goals of the Decade for Women, adopted measures for gender equality and for women’s participation in peace and development efforts as outlined in the Nairobi Forward-Looking Strategies for the Advancement of Women.

The NGO Forum was held on the campus of the University of Nairobi and is often seen as the symbolic moment when feminism became visible as a global movement spanning the North and South, and many of the new global networks began emerging. From the vibrant Peace Tent to the forum on Women, Law and Development, and the informal daily lawn discussions on lesbianism, women from all regions were eager to exchange strategies and network. Women’s groups in all regions had grown during the Decade, and feminist leaders from the Global South began to take center stage. The diversity of women’s lives and perspectives started to be embraced by many as a strength, and there was growing consensus that all issues can be ‘women’s issues’ and need to be looked at with a gender lens. (see p. 17-18 of Passionate Politics activist guide)