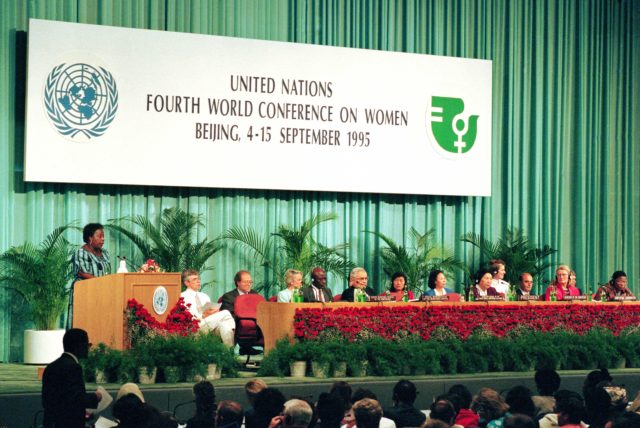 The opening day session of the Fourth World Conference on Women in Beijing. Gertrude Mongella, Secretary-General of the Conference, addresses the session. UN Photo/Milton Grant

The Fourth UN World Conference on Women, held in Beijing, China on September 4-15, 1995, was the largest UN world conference ever held to date. More than 5,000 representatives from 2,100 NGOs and more than 5,000 media representatives attended the inter-governmental proceedings along with some 6,000 government representatives from 189 countries. Nearly 30,000 individuals attended the parallel NGO Forum, which served as a world jamboree that showcased and celebrated the vast and diverse expanse of women’s movement organizing at the time. Women’s rights are human rights became the prevailing mantra of this event.

The Conference was mandated to advance women’s rights in the realms of poverty, education, health, decision-making, and violence against women. The Beijing Declaration and Platform for Action includes 12 Critical Areas of Concern that serve as a compendium of what human rights for women encompasses. In addition to the topics above, it also developed chapters on the Girl Child, Women and Armed Conflict, Women and the Media, and Women and the Environment. The BPFA reflects a high point in commitment from the international community and nation states to the advancement of women, calling for a gender perspective and outlining specific strategies in policies and programs at national, regional and international levels. While the conference demonstrated growing global interest in women’s rights, its debates also exposed its most controversial aspects and the growing strength of the conservative political forces opposed to women’s human rights, foreshadowing the backlash against these rights of the early 21st century.