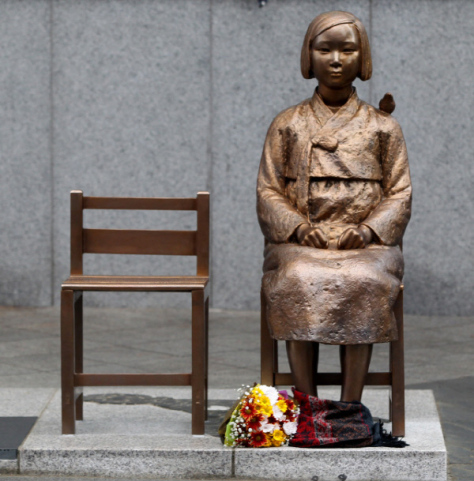 “The International Public Hearing Concerning Post-War Compensation of Japan,” held at Tokyo Panse Hall on Dec. 9, 1992 brought together “comfort women” and their supporters from several Asian countries, especially South Korea and the Philippines, where they had begun to speak out. The conference addressed various issues of war crimes, but especially the subject of “comfort women”- women forced into sexual slavery for the Japanese Imperial Army during World War II. Six former “comfort women” from various countries testified how they were abducted, raped and tortured by Japanese soldiers and held in special camps often for many years during the war. Although the exact number of victims has not been established, it is estimated that between 100,000 and 200,000 women were kidnapped or deceived into serving in “comfort stations” set up by the Japanese Army to provide “sexual relief” to soldiers and officers, as many as 50 each day.

This event exposed the issue to a wider public, and justice for the surviving comfort women became a major cause pursued over the next decade of feminist organizing, particularly in Asia. This issue was featured in the Vienna Tribunal to demonstrate that rape and forced prostitution in war were long-standing human rights abuses that governments and international justice mechanisms had long failed to address. The culmination of this organizing was the Tokyo Women’s Tribunal in 2000 which sought to reach a people’s verdict on the culpability of the Japanese government.  (See entry on Tokyo Tribunal, 2000).